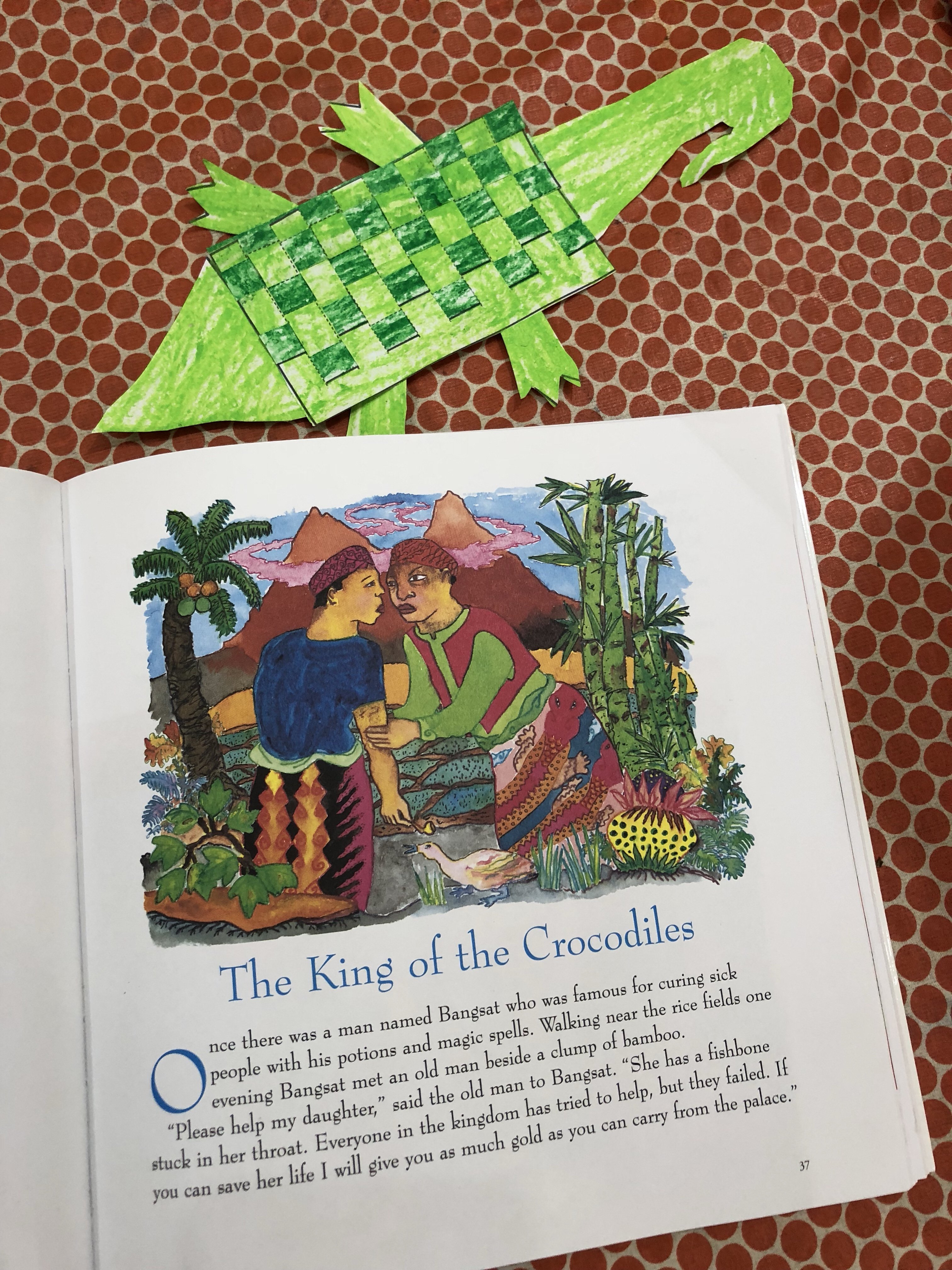 This is the second of our Literacy Themes for Year 1. To see our Year 1 Fairy Tale Theme – click here. We tied in this Literacy unit with Black History Month. We chose a range of stories including, Mama Panya’s Pancakes, a traditional take from Malaysia called ‘The Crocodile King, ‘ and Bismillah Soup. We also tied in our Islamic Studies and covered the story of the Prophet’s (pbuh) companion Bilal and the story of Prophet Dawud (as). You can also include a range of other stories such as Handa’s Surprise,  Nusaiba and the 5th grade bullies and so many more – Let us know in the comments any others your would suggest. Anyway, here’s what we did:

As we began this unit in the month of October, we wanted to combine our story with Black History Month and Islamic Studies. We chose to focus on the story of the Prophet Muhammad’s faithful companion Bilal (ra), also the first muezzin (one who calls to prayer) in Islam. Whilst there are many prominent Black figures in Islamic history, we chose to focus on Bilal (ra) as it was very close to home here in Makkah and a prominent story we could begin with as we were talking about Black History Month for the first time. For our children we wanted to keep the story quite simple an on my search for books online, I barely found any that were aimed for young children, so I created my own. I drew out some pictures on the ipad procreate app and put together the text.

Update – you can now purchase your new updated version of this story here.

Day 1: I introduced the story to my girls and we discussed some of the issues that came up straight away. For example, what a slave is, why was he being punished? what is a muazzin etc. This is the time to discuss the book, thinking about how Allah made us all equal no matter what colour we are. We cannot think we are better than others because of the colour of our skin. We spoke loads about how we treat others too.

Day 2: We used the pictures I had created to sequence the story in order the next day. We discussed what the story was about and thought some more of what happened in the beginning, middle and end. This is a great way of recapping a story without simply reading it again and again. Allow children to really interact with the story, so story sequences are a great way to discuss what happened.

Day 3: We wanted to look into more detail at the character of Bilal (ra) so this time we looked back at the book and looked at how he was described, what he did and how we reacted and what we could tell about his character. Discuss his character, write the key words out for the children and allow them to write sentences.

Day 4: We looked back at another version of the story which focuses on the characters of Abu Bakr and Umayya ibn Khalaf. We discussed their similarities and differences. If you have time you can write a sentence each or leave it as a discussion. It was interesting to note that both men were rich which my eldest pointed out, but Abu Bakr was generous with his money whereas Umayya was greedy and mean.

We focussed mainly on this story this week but my youngest really wanted to make some Bismillah Soup so we managed to squeeze from crafts for her and even attempted to make some of the soup! Here’s what we did this week.

Day 1: We started by reading the story of Mama Panya’s Pancakes. We discussed the story briefly. I asked the girls what they enjoyed most (this is one of their favourite books). We looked back at the story and wrote a shopping list of what Mama Panya bought from the market.

Day 2: We looked back at the story and this time we looked at all the people that Adika invited and wrote a list. I explained that we should help Adika make some invitations and we spoke about the important information needed when writing invitations: time, date, the place, who you are inviting and who its from! Model writing an invitation to one of the characters on the board first, the girls got the idea and were able to write by themselves and decorate the invitation in the end.

Day 3: We looked back at the story again today and focused on the setting of the story. My 5 year old was always intrigued by the fact that they were barefoot in some of the pictures. The story is lovely as it shares facts about village life in Kenya. We read up on village life in Kenya and decided to  make a mix-medium craft of the Adika’s village using using string, sand and oil pastels. Below the girls were also blog printing some fabric to wear at their own Pancakes picnic!

Day 4: The book also contains Mama Panya’s Pancake recipe at he back and we had to make some. So we left this day until last – but you can easily start this book by following the recipe to make the pancakes. The girls really enjoyed this hands on lesson and choosing their toppings to fill their pancake. For older kids you could even ask them to remember the steps and write up the recipe at the end.

Week 3: The King of the Crocodiles

This is a story from my Malaysian folk tales for children book that we picked up on our holiday to Malaysia – more on that here. The girls absolutely love this story and were so curious about the ending and morals we could learn. Here’s what we did each day:

Day 1 & 2: We started by reading the story ‘The King of the Crocodiles.’ It was a fairly long story with some rich language so there was lots of discussion. We then decided to sequence the story but this time in text – as the story was sectioned in 2 parts. I rewrote parts of the story in simple English for the girls to be able to understand. They read the different parts of the story and put it into order. The next day we did the same with the second part of the story and drew some pictures in the end. The girls also made a crocodile weave craft!

Day 3: We focused a little on understanding the story through our introduction to comprehension questions. This meant lots of discussion and looking back at the simple text of the story now in their books.

Day 4: By the final day of the week, we discussed the moral of the story some more thinking about the lessons we could learn from the end of the story.

Week 4: The story of Prophet Dawud (as)

In our final week on Stories from other cultures, we wanted to included an Islamic Story but more so one of the stories of the Prophets as a narrative in our literacy session, not just something we look at in Islamic Studies sessions. This followed on perfectly from the previous story about morals and teachings, as we know the stories of the Prophets from the Quran are for us to learn lessons from.

Day 1: We read the story of Prophet Dawud (as) from Zanib Mian’s book ‘Migo & Ali: Love for the Prophets.’ We discussed the story about the brave boy Dawud and the huge giant Goliath or Galut (in Arabic). We focused on description and speaking about the story today. We followed up by making our own slingshot like Prophet Dawud had used. We scrunched up little pieces of paper for it. We also spoke about the safety of using a slingshot as it could hurt someone as it hurt the giant.

Day 2: We described the character of Prophet Dawud (as) in a spider diagram, choosing words from the story to help us – this also meant we looked at the story in the book again. We wrote some simple sentences.

Day 3: We looked further at the character of Galut as described in the story. We made another spider diagram and used describing words. We spoke of the differences between Prophet Dawud (as) and Galut.

Day 4: On the final day we discussed the morals of the story and listened to the verses in the Quran. We also wrote up the story in our Prophets of Islam Time line book – another project we are working on slowly.

So this was how we taught the literacy unit Stories from other cultures and made it into a theme that fit with stories we wanted to read ourselves, including stories from Islamic History and culture, stories from Africa and Malaysia. I hope this has been useful for anyone looking at ways in which to teach stories from other cultures. Again all our children work at their own paces and style of learning, so what works for us may or may not work for you. If you have any questions or suggestions on other books that would fit into this theme, feel free to comment below 🙂